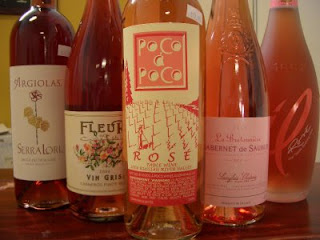 Okay, so I completely blocked the end of summer and forgot about Labor Day, so ended up deciding to stay local for the duration. And where else to start with the Bay Area's best value than the Wine Mine http://www.winemineco.com/ . For only $1.00, we tried 5 Pink wines. I love anything with that seductive blush hue. These wines ranged. My favorite, which I bought, was the pink Il, a charming pink prosecco from the Veneto region. I was particularly charmed by the way they got us to try the White Zin. As they poured the second choice, the server engaged us in a guessing game. So convinced was I that it would be Pinot Noir, I could actually smell the champagne bubbles. Then, he told me I was cold. But it was a Russian River varietal? We sipped, we swished we guessed---wrong. And then when we finally realized it had to be Zinfandel, white zinfandel we were so delighted with ourselves for guessing, it was fully five minutes before we realized. Hey, it wouldn't be the last of the White Zin for me, but then, I have a fondness for the 80's in general (is that VH1 classic marathon still going on?).
The convenience of the stay cation is that I could go home to drop off my purchases and avoid any risk of baking my wine, which I did on the way to the Art and Soul festival in Oakland.
This three day extravaganza hosts several stages of dance, blues, latin etc. And vendors galore purveying all manner of inappropriate food choices. So we wandered sampling sausages, snacks, Ethiopian honey wine observing the crowd, the booths and even spent some time watching the acts. But what I was really after was Barbecue. Xandria remembered a visit past and the best barbecue from some random place in Hayward. Of course at the end of out walk, adjacent to the blues stage we found a barbecue place with the only detail she could remember: Hayward. We got a plate of tri-tip and a plate of ribs and created a DIY combo. Xandria selected a Merlot. Inspired by my visit to the Wine Mine, I selected the Vendange White Zinfandel. Cool and slightly sweet, it stood up to the rich barbecue with a sauce redolent of smoky spices and slinky with honey, the meat perfectly cooked to a toothsome tenderness. After taking advantage of the washing up stations, we tried to go to the Franklin SquareWine bar http://www.fswinebar.com/, but alas, like last visit when they forgot about us and we huffed off to Sea Salt, we arrived too early and never made it back. I saw the Grayson cheese plate in the window, too. It would have been fun. Maybe later. Because the downtown was so crazy with Art and Soul folks, we opted for Lakeshore. And headed for the Vine Wine bar: 3343 Lakeshore Ave (between Lake Park Ave & Trestle Glen Rd)Oakland, CA 94610 (510) 444-8463 ww.vinewinebar.net It's a cute place and has those weird ATM style dispensers. I was pleased to see two varietals that have heretofore eluded me in my Century club quest: Arneis and Lagrein. However, they were having some challenges with the machines and some of the wines came out with an inappropriate and pronounced appley aroma and flavor. When the third pour we tried was "Calvados-like" we knew we had a problem. I tried the:
Jacuzzi Arneis
Lagrein (producer NA)
Ridge Chardonnay
Pahlmeyer Merlot
ZaZin! Old Vine Zinfandel
PlumpJack '04 Reserve Cab Sauv <----This wine was the standout of the day fully deserving of its WS 94 points. A great high point to end our day! This photo is Special to the Chronicle by Kat Wade. NOTE: If you are visiting this spot please resist the urge to douse your entire party in Victoria Secret Body butter. When we were there, we ended up upwind of a party of party people who resembled in an olfactory sense human Bath and Body shops. Nobody needs that much cheap perfume people! 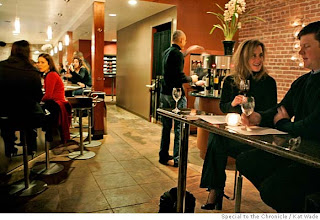