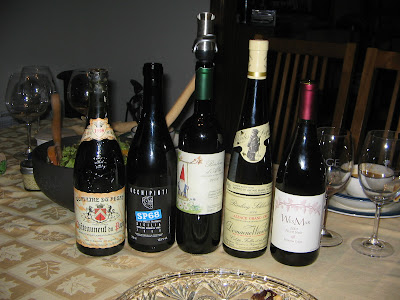 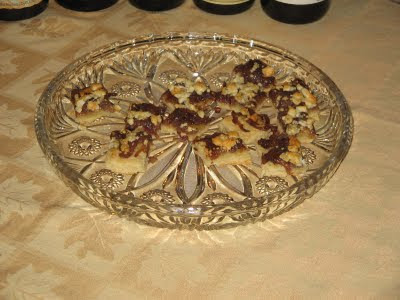 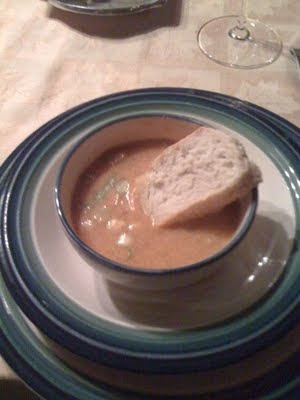 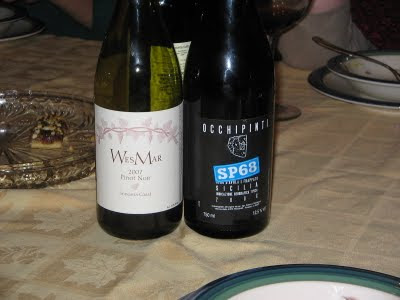 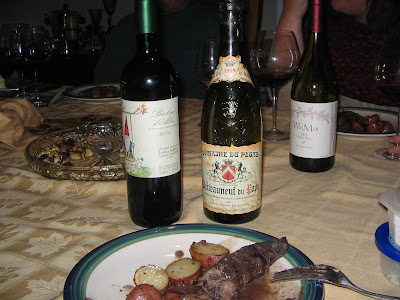 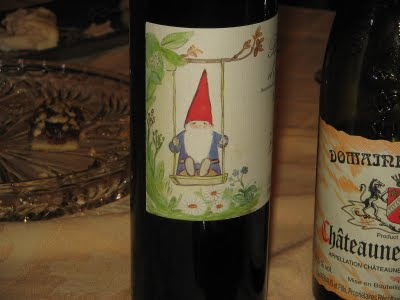 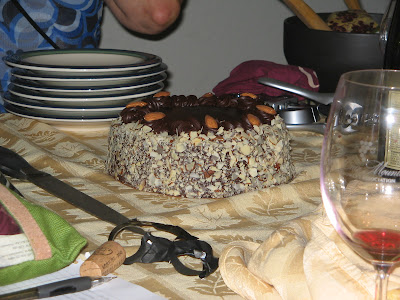 
IN SUMMARY: All of these wines were well-made and very drinkable. And they all paired with the dinner that Jill prepared which we did not even plan on. It was a magical night in which food, wine and women came together . As for women winemakers I am not really sure if the wines are different because they are made by women but I would love to hear any feedback about that. I also get the feeling that we will have more tastings such as this because there are so many talented women making wine. So tell us, who are your favorite female vintners?
Posted by Xandria 5 comments: 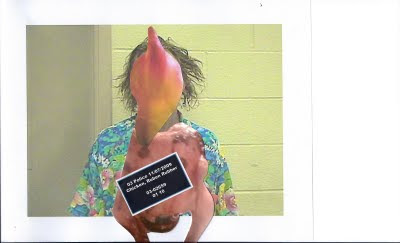 Deep in the heart of Calaveras County you will find a magical forest where rubber chickens grow on trees. Drinking copious amounts of the delicious wine also native to the Rubber Chicken National Forest will aid immeasurably in suspending your disbelief impulse. Drinking even more delightful wine from Twisted Oaks Winery will not in the least detract from the certainty that this recipe will turn out for you. Cooks need wine. It is an unassailable fact. Good photography, on the other hand seems to have an inverse relationship with blood alcohol level. Go figure! Anyway, while the

results of this recipe may appear unappetizing ( Luscious Lush Thea suggested I title it "Alien Chicken"...you'll see why), if you give it a try you will fill the air in your abode with savory aromas, delight your guests and facilitate a dead easy pairing.
Here's how:
Most Wanted Chicken - or Results of Ruben's Bender
What you will need:
A stick of butter, softened
1 whole roasting chicken about 4-5 lbs
Long, thin strips of lemon zest, about 1/4 of the skin of a large lemon
1 large clove of garlic, peeled and whole
1 can of Vernor's Ginger Ale
1 cup Twisted Oaks Ruben's Blend, White Rhone Blend divided into 3/4 cup and 1/4 cup
Coarsely ground salt
1 tablespoon Grains of Paradise (these are hard to find but insanely delicious; you can try white or pink peppercorns, freshly ground )
1/2 lemon sliced crosswise into 2 pieces
2 tablespoons finely chopped Italian flat leaf parsley
Start by moving the racks in your oven to the lowest position.
Preheat oven to 375 degrees.
Then, take the can of Ginger Ale and pour most of it into a glass, leaving about 1/4 - 1/8 of a cup left in the can. Add the 3/4 of a cup of the Ruben's Blend wine, the clove of garlic and the lemon zest to the can. Set aside.
Take the chicken. Remove and discard the giblets. Rinse the chicken inside and out and pat dry. Place the chicken in a shallow roasting pan, either lined with foil for easier cleanup or

unlined if you want to make gravy. Take the remaining 1/4 cup of the wine and pour into the inside cavity of the chicken. Swish around. Lay on its side to rest and relax while you arrange the rest of the ingredients.
You will need the coarsely ground salt, freshly ground pepper, softened butter, chopped parsley and lemon pieces. It gets messy from here, so it's best to have everything handy. Take the butter and rub chicken with it inside and out. Use the entire stick of butter. It's okay if the wine drips out onto the roasting pan. Then sprinkle salt, pepper and chopped parsley all over outside of chicken.

Next, take the 2 pieces of lemon and inset them into cavity of chicken. Lastly, take the half full, seasoned, ginger ale can and carefully insert it into chicken without spilling the contents. The chicken is able to stand on the can. If you can rope someone into helping you during this step, it's easier, but the butter definitely makes it easier to push the chicken onto the can without spilling the contents of the can.
Place the chicken on the lowest shelf of the pre-heated oven and roast for 60 - 90 minutes or until the internal temperature reads 180 degrees.

When that is done, take the chicken out of the oven and let it rest for at least 15 minutes. After the wait is over, carefully remove can from chicken using oven mitt. If you are planning on making gravy/sauce, you can reduce pan drippings over the stove directly in the roasting pan. You can also use the drippings as a butter sauce as is. The ginger/lemon/grains of paradise combination tastes great with the butter.
This should easily produce a moist flavorful chicken that pairs extremely well

with the Rousanne, Marsanne, Rolle and Viognier in Ruben's Blend. 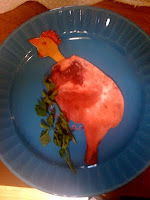 The ginger ale, wine, and seasonings combine to steam the chicken and infuse it with flavors of the Rhone, while the butter crisps up the skin and self bastes. We served it with fluffy mashed pototatoes that we had flavored with (more) butter and white truffle oil.
Okay, so Thea was right: it does look like Alien Chicken. Here is a retouched photo --------->

Disclaimers:
1) No Rubber Chickens were harmed, roasted or otherwise bent, spindled or mutilated in the production of this piece.
2) I used the Beer Butt Chicken recipe from WasabiBratwurst for inspiration
3) 2007 Ruben's Blend came in one of my Twisted Few shipments, so I don't know how much it cost...but you get a discount and invites to super fun events if you join, which if you had any sense, you would!
Posted by Unknown 3 comments: