I had known Los Vascos wine from their great QPR perspective.  It's a wine that goes well with many kinds of food at a surprisingly low price point.  I love wines like this that prove to my novice wine drinking friends that wines don't have to cost a lot to be delicious and food friendly.  But the wine I selected also has characteristics that pique the interest of experienced wine drinkers [Like @brixchik_Xan for example, who was delighted with the Old World sensibility of the '09 Cabernet Sauvignon]

Especially at this time of year, I like to have a cache

of these types of bottles handy.  I could go on about the lovely flavor of the wine; it does have nice if subtle red fruits and a balance of cooking and baking spice hints that made it yummy and versatile.  I brought it to a tamale party and found the structure up to the task of matching with chicken mole and red sauced pork tamales.  The 2010 had prettier aromas, but was a little food slutty.  The '09 was easy drinking and easy pairing.  Rich ruby colors.  Kicky aromas of red fruit, hint of berries, and spice.  Friendly structure with tannins that mix well with all your friends and neighbors.  A Latin inspired party sensibility you might expect from Chile with the grace and sophistication of the hand of Chateau Lafite.  Chateau Lafite purchased 50% of Los Vascos in 1988 and has been guiding quality ever since. 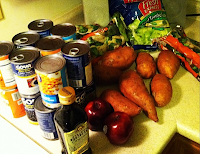 But this is for a super cool prize, which is to attend the Wine Blogger Conference as a guest of Los Vascos.  So while enjoying my bottle of super priced yummy wine, I was casting about for a more creative theme to which to pin my post.  When all of a sudden, I started hearing about Cory Booker, the Mayor of Newark New Jersey and his Food Stamp Challenge.  Basically his premise was that he wanted to learn from first hand experience how it felt to try to live on the $1.40 per meal per day that many people in our country live on if they are living on what is provided from food stamps. You can see pictures of his groceries there.
Since I got such a good deal on my Los Vascos wine, I was confident I could go one better, by reducing my grocery bill by $9 and living on $22.  I figured I would follow Cory's example and eschew meat for a week.  Additionally in this season of sharing, I planned to donate the difference between the $22 and my previous week's grocery tab.  With a kiss goodbye to Whole Foods, whose door I would definitely not be darkening for the duration, I hit the local Pack and Save.  Getting a box of Cream of Wheat, two bags of pinto beans, 2 apples, 1 onion,  two oranges, three cans of chopped tomatoes, a bag of iceberg lettuce, the biggest package of corn tortillas they sold and a large chunk of grocery store cheese, I was on my way.  It came to about $22.

It seemed incredible to me that I would be able to make it a whole week on less than I sometimes spend for lunch.  I found out, where there is a will, there is a way.  Luckily, I bridged two business trips and did not have to entertain clients.  The one day I did have to have lunch outside of home, I hit the Taco Bell where there are 5 options under $1.40.  And the one work event I did attend, I rationalized, if someone else is paying it's okay...Well,  maybe it wasn't so okay to devour my weight in sushi.  Let me tell you it never tasted so good! 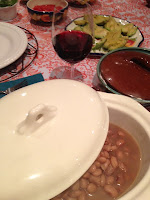 Although I will say, that the beans that I cooked were delicious.  I used them in tostadas, burritos and even a taco salad.  And my system felt great skipping processed foods.  The trash was much lighter too with no prepackaged packaging or take out containers.  And with my affordable wine, I didn't feel at all deprived---for a week.  Realistically, I couldn't have done it for another week.  And I did cheat  like a televangelist with a sex addiction a little: For every item I pulled out of my pantry (Swiss Miss Cocoa, olive oil, bay leaves, coffee [Sorry, Cory, no way I could give that up!  I would have gone to the nearby Courtyard Marriott and shoplifted a cup every am before I could let go of the Java Monkey!]), I bought a package and took with my donation to Second Harvest Food Bank  of Alameda..

I had already known that Los Vascos is an affordable treat, but I learned a lot from my week on the #SNAPchallenge that made me appreciate all that I have and made me want to share more to make it easier on the people who don't have enough. Many thanks to my friends who participated along the way, Veronica who had great tips, Francine and Janesta who enabled my #SNAPchallenge dinner party by bringing dessert and avocados.

To the folks at Los Vascos, thanks so much for making a challenging week more fun with your delicious and affordable wine.  Pick me for your 2013 Blogger and I will bring a creative perspective to Penticton!

Simmer for 90 minutes. Season to taste.

Concannon Pinot Grigio. Too tall to fit in my eval of the SkyBar OneWine system, so we are drinking it. Pale citrine in color. Honeyed aromas of stone fruit with splashes if fresh, cool river rocks. Lively pleasant flavors. We snarfed it down with Brie in apple slices and it was tasty. Look for it in Safeway and other places you rush by in your holiday shopping to carve out a little you time in your Yule Tide! 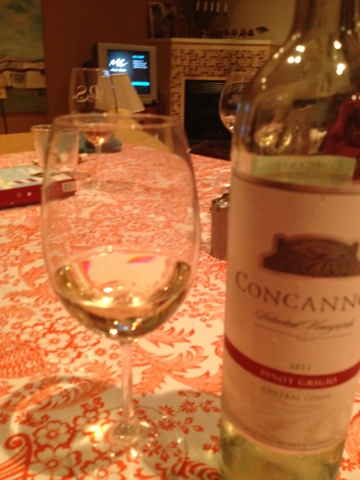 Holiday Magic in Hopland - Do well, by doing good

If you have time Friday, here is someting not to be missed (not unlike the McFadden Pinot Noir!)


Bring a new unwrapped toy to the McFadden tasting room for the Hopland Volunteer Fire Department to deliver to a child who needs your help. You will receive a raffle ticket for prize drawings including a $200+
assortment basket giveaway of McFadden Farm goodies.

release the same wine...with an extra 18 months held on yeast. Their first

ever vintage reserve "super" bubbly, the 2009 Reserve Brut, and arguably,  their best

were a surprise: late harvest and botrytis blessed. Taste the first ever

The 2011 McFadden Chardonnay has vanilla, cream, and butterscotch caramel

notes, which is a bit of a holiday miracle for a stainless steel wines

McFadden's 2011 Gewurztraminer is showing the spicy notes that would lead

a blind-taster to assume an Anderson Valley Gewurz, married to more


20% off everything in the tasting room; wines, grass fed beef, culinary

Toys For Tots toy drive and wine tasting at McFadden.