Frances - Part 2 "Come for the Wine, stay for the food" 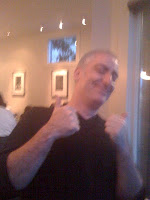 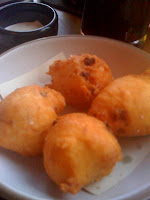 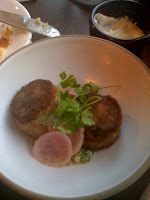 Yum!  Neighborhood gem that is also a finalist for a 2010 James Beard Foundation New Restaurant award along with the delightful an innovative wine by the ounce described by Xandria below?  You just have to go.  Fresh seasonal ingredients combined in delectable balance to form toothsome plates, small or large.  And a super fun place to go to enjoy with friends who don't mind sharing.  On several recent trips I had the opportunity to pretty much eat through the offerings and was dazzled by each and every bite.  Crispy golden doughnut bites studded with smoky bacon and dunked in chive spiked creme fraiche.  My three favorite salad ingredients: beets, avocado and cara caras, supermodel pretty and drizzled with a whisper of spiced dressing.  Riccotta gnocchi in a subtle sauce melting in your mouth with tender contrapuntos of shelled peas.  Calamari kissed with wood fire in an alchemical seasonal salad blend (currants, presernved lemon et al.).  Tempting pork trotters.  Bolero carrots in a perfumey dew of wildflower honey.  The list goes on and on.  And best of all it changes with the freshness of the market.  Supported by excellent, entertaining and knowledgeable staff that make you feel welcome.  Start with a market shot.  Literally, whatever temptingly fresh item leapt into the basket that morning, juiced into an essence of color and flavor.  Share plates small and/or large, because you will want to try one of everything.  And leave room for dessert.  Flavors are supported with an interesting wine list, but you will delight in the by the ounce option.  The blend may change, but delish rhones in vibrant combinations await you to while away some time in sunny Noe Valley.  Decor that is unfussy and elegant, serious yet comfy.  Melissa Perello is rocking it daily here.  Go early!
Frances is located at:
3870 17th Street
San Francisco, CA 94114
(415) 621-3870
http://www.opentable.com/ for easy, breezy reservations! 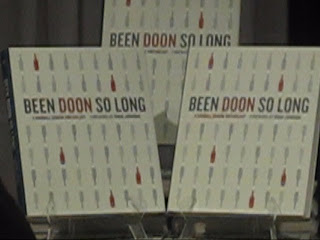 Randall Graham, owner of Bonny Doon Winery, has been touring the country touting his new book “Been Doon So Long. A Randall Graham Vinthology.” I recently attended one of the stops of his so-called “Bataan Death March”, put on by the San Francisco Mechanic’s Library, in which we got a sneak peek of the book and Randall’s unexpected literary abilities. Indeed, Randall calls himself a provocateur, punster, philosopher and winemaker (of course.)

“Been Doon So Long” is a compendium of Randall’s literary parodies and fictions plus some serious essays on winemaking. He describes the book as the telling of his journey as a winemaker moving from the making of "vin d’effort" to the making of “vin de terroir”. "Vin d’effort" refers to wine that is totally controlled and created by the whims of the winemaker. “Vin de Terroir ” is the wine that expresses the place it comes from which includes the effects of the soil, climate and location. As he tells it, Randall has now become more of the maker of vin de terroir, letting nature take its course in the magic of the making of wine. 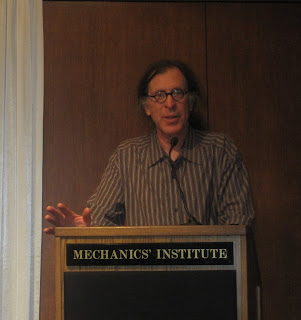 That night we were blessed by Randall’s reading of two of his incomparable parodies. “Trotanoy’s Complaint” is the exploration of a neurotic/erotic wine obsession a la Phillip Roth’s "Portnoy’s Complaint." (And yes, it all began with his Jewish mother’s dusty corkscrew…) This parody is where I found the “auto-oeno-eroticist” part of the title. I love thinking about what that might just mean. Hmmmm...

For an excerpt of the book go here: http://www.beendoonsolong.com/book/excerpt/

I say read this book and get tangled up in Randall’s provocative prose, thoughts, and off-beat humour. And be sure to enjoy it with a bottle of the 2006 Le Posseur Central Coast Syrah. Makes it even better…

RG NEWS ALERT: “Been Doon So Long” was just nominated for the 2010 James Beard Book Award in the Beverage Category (winners announced in May). Not only that, Randall was also inducted into the Vintner's Hall of Fame. Kudos to you Randall and your justly deserved accolades. Life must be good! 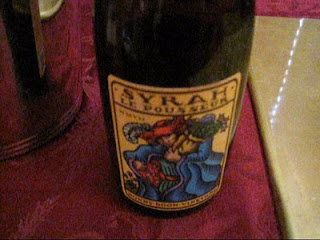 We got to taste this food-friendly Central Coast Syrah. Under 14% alcohol.
Posted by Xandria 3 comments:

Frances - A new idea in serving wine at a fine restaurant: wine by the ounce

Quickly, bring me a beaker of wine, so that I may wet my mind and say something clever ~ Aristophanes

Well I understand the wisdom of wetting my mind with wine as quickly as possible. And speaking of beakers of wine, we recently had the experience of drinking two beakers of affordable yet delicious wine at a new San Francisco restaurant called Frances.

Melissa Perello, former executive chef of FifthFloor, started this new venture named after her grandmother. I am not reviewing the restaurant in this posting but suffice it to say the upscale comfort food was delicious, the service outstanding and the wine list diverse.

Beakers of wine? Yes, beakers. 18 oz. beakers of wine shaped like carafes to be more exact. And the wine inside was fantastic. Dave Corey of winemaker/owner of Core Wine Company, and beverage director Paul Einbund (former sommelier at Coi) worked together to create the unique “wine-by-the-ounce” program. In fact, the wine is $1 per ounce. You are served the 18 oz. beakers of wine and then charged by how many ounces you drink. We ordered 2 beakers and three of us drank almost 40 oz. of wine. Total cost: $40 for two beakers of delicious vino. In the world of upscale dining that is a deal.

There is a white blend of Grenache Blanc with smaller amounts of Roussane and Marsanne. The red is a blend of Grenache, Syrah and Cabernet Sauvignon. The grapes come from Santa Barbara County from vineyards used by Core Wine Co. Both complemented the food quite nicely and we left happy and impressed.

Find out more about Core Wine Company at www.corewine.com
Posted by Xandria 4 comments: