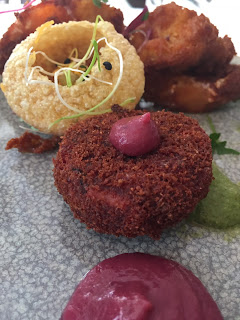 Dosa in San Francisco's Fillmore District is an airy, elegant restaurant that focuses on Indian cuisine.  The balance of Indian dishes with heat and sour and tang and sweet compels me to eat, but not so much to pair with wine.  Finding wines to handle that challenge is usually to drink beer---not that there's anything wrong with that.  Indian cuisine has a history going back seven thousand years and spanning a huge country, whose culture has not always been wine friendly.  And given the climate, my first rule of wine pairing "Grows with ...goes with" doesn't apply either.  I was most excited to attend the Rias Baixas lunch to see what would happen.

Turns out, an amazingly tasty ringer was waiting to be discovered: Albariño from Spain's Rias Baixas region.  Typically this wine is low in alcohol, redolent with minerality, and fruity.

Master Somm, Yoon Ha of Benu teamed with Dosa Wine Director Todd Smith to fine tune the pairings and showcase the possibilities.  Todd has a love of Indian cuisine and skill with wine.  He gave us a master class on Southern Indian food styles the best way possible, by serving it.  We could tell the pair enjoyed the exercise of bringing the wines into focus with the specific food of Southern India.

The first item brought out was called "bread and water" in which a crispy husk of dumpling was filled with tamarind-cilantro chili water.  For once I paid attention and devoured the flavorful concoction in one bite.  A flavor explosion ensued with the tangy sweet, brightly herbal, spicy water matched with the texture of the dumpling.

Dish after dish of texturally interesting, exotically spiced delights came out in waves.  Initially I was skeptical during Yoon Ha's presentation, but when I tried the wines, good, great and synergistic matches happened. 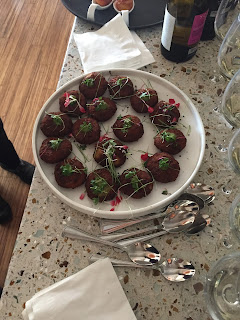 Some of these contain more than forty ingredients, so these wines got put through their paces.  Many are easy to find and will be on my summer rotation

First a little about the region.  Rais Baixas located in Galicia it has a maritime climate with lots of rainfall and lots of sun, each in balance at the right season for grapes.  The soils are great with lots of granite.  99% of the wines from the Denominacion de Origen (DO) are white.  And the thick skinned, scrappy, and we found delicious, Albariño, is key variety.  The Tastemakers brought some great Albariños:

Martin Codax 2015 ($15): Aromas of apricot, subtle yeasty notes, freshness and apple.  Full bodied but still bright and refreshing with a kick of honey in the midpalate and a long apricot finish.  2g/l of residual sugar made this wine sing with the spicier dishes.

Pazo de Señorans - 2015 ($21) Aromas of apple, papaya with lime, honeysuckle and yellow grapefruit.  Freshness was the topnote in aromas and flavors.  It managed to be rich and crisp at the same time.A pleasant floral herbal note in the finish and no leesiness.  Medium plus body with an apricot laden finish.

Mar de Frades, Ramon Bilbao - 2015 ($14) This wine had a brightness with vinous aromas along with jasmine, apricot and coconut.  Nice complexity marked by a touch of sourness that really helped cement the pairings. Round texture with a hint of salinity in finish, I found it to be a wine I kept going back to try more.

Bodegas Vionta, You and Me - 2015 ($18) Aromas of white flowers, honey and stonefruit.  Bright with acidity and rich in texture but lithe, this wine has a pleasant bitterness in the finish, which makes diners go back for another bite, says Todd.

Valmiñor - 2015 ($14) This wine was more of a medium yellow, which was darker than the paler colors of the previous wines.  Aromas were pear and bay leaves.  Flavors were apricot, yellow grapefruit, an touch of beer-iness and a flash of green.  A full bodies wine with an unctuous texture, it held apricot and a surprise: Maldon salt in the finish.

Pazo San Mauro - 2015 ($18)  Medium yellow color.  Vinous aromas.  Full texture but shot through with the most pronounced acidity of the batch

Pairing these wonderful wines with such exotic tastes was a great experience.  Look for Albariños from Rias Baixas next time you order in.  Or better yet, make time to visit Dosa and taste their expertly prepared food stylings.


Many thanks to Gregory White PR for hosting the lunch.