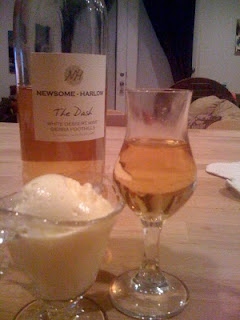 A lot of people do like to skip dessert---I'm not one of them.  And sad to say am not evolved enough to be europeanally happy with a nice piece of cheese, which would make pairing relatively easy.  However with a little luck and ingenuity, pairing desserts with wine can be easy and fun.  One of my favorite pairs is the Aglianico and Chocolate Budino at A16 in San Francisco, which I described in rapturous detail previously.
When I have people over, I love making home made ice cream for the simple reason that it is easy to make it in advance and then it's one less thing I have to think of, without resorting to swathing a Trader Joe commercial offering in whipped cream.  Plus, if you make the ice cream yourself, you can present more exotic options like rose petal, St. Supery peach (thank you Lesley Keffer-Russell), dried cherry-port, the list goes on.

My go-to base takes two days to make, what with the custard cooling, etc, so I have been experimenting with a quicker recipe that lets me go from cravings to savorings in under an hour.  So for this Wine Blogging Wednesday, I knew exactly what I wanted to try.  Newsome Harlow puts out a dessert wine called "The Dash".  Labelled a Sweet Dessert wine, I think it is made from Late harvest Muscat Canelli and it is delicious all on its own.  With a peachy, gingerey flavor and silky rolling mouthfeel ,capped off by a sweetly spicy finish, it is very tasty.  Since it reminded me of Sauterne, I thought it would be perfect to incorporate into the sabayon base for my gelato.

Over a double boiler, with water on a low simmer, beat 6 eggs yolks with 2 tbs sugar with an electric mixer until the mixture is pale yellow and very thick...about 4-5 minutes. Be careful not to overheat as yolks will cook. Reduce heat.  Whisking vigorously with a wire whisk, add the 1/4 cup of wine  into the egg yolk. Then add, the orange zest and the remaining wine as well as the port.  Add the liquor slowly while whisking continuously.  When the mixture is thick enough to coat the back of a spoon it is done.

In separate bowl, whip cream into soft peaks. Add remaining sugar and continue beating until well mixed but stop before the cream gets too stiff or turns to butter. Once sugar is mixed in, fold in sabayon. Once the two mixtures are loosely incorporated, pour into ice cream maker and process according to manufacturers direction. I usually take it out of the ice cream maker at a soft stage and place it in a freezer container to set.

Paired with The Dash, you get the complementary textures of the opulent, silky wine together with the meltingly silky ice cream.  Talk about Tender Twosomes! Delicious!

Newsome Harlow is located in Murphys, California.
Posted by Unknown