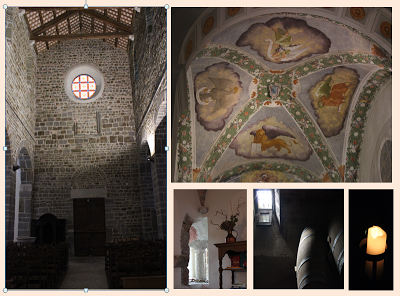 Located in the town of Udine, Abbazia de Rosazzo has a long history we could see in the architecture as we scurried in out of the rain.  The name translates to: Monastery of roses. Legend says it was started around 800 by a hermit monk named Allemanus, who started an oratory on the present day site.  It was such a culture of peace, that it grew to Abbey status.  When the Benedictines took over, they brought wine and olive oil technology.  These advances moved the Abbey forward economically and it grew  very powerful under the  protection of Rome.  Even the Venetian doge had them make him a special wine. Then Venetians fought to capture the area and the abbey became a fortress, which caused  spiritual decline as warrior monks took over and the peace was lost for many years.

In 1533, the reconstruction was finished.  After it was rebuilt, an artist was engaged to create frescoes all about St Peter to whom abbey had been dedicated in 1070. The area suffered after World War II as the formerly peaceful lifestyle was disturbed.  People left the area abandoned.  Until Livio  Felluga, who couldn't bear to see the post war depression continue started to bring back viticulture, mixing new modern technology with hard work and a singular dedication toward rebuilding the wine culture in the area.  He is credited with bringing back the Friuli wine region and thanks to his dedication and passion, we can visit the beautiful grounds and taste the lovely wine. 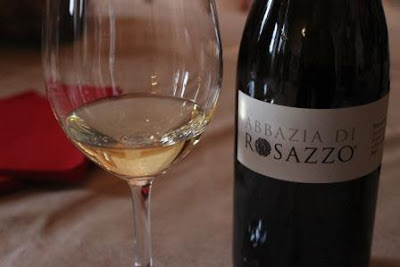 And the Wine tasted more lovely drinking it in situ with awareness of the history of it.

A blend of Friulano - Pinot Blanc - Sauvignon - Malvasia - Ribolla, it gave me a jolt of terroir.  The wine was pale gold with aromas of flowers and citrus.  It had round mouthfeel with flavors of something tropical and spice.  The finish was medium.  I marvelled at the taste of place it gave me, being able to look out on the terraced ronchi planted by monks, but restored by the visionary, Livio Felluga in 1979.

There is more than destiny of taste. Our guide told us the story of how the original rose of the Abbey present for so many hundreds of years disappeared after World War I.  Turned out, a soldier had brought a cutting to America. nurtured it and in 1929, when he heard of the rose's extinction, sent a clipping back and so the original rose of the abbey is there to this day.
Make an appointment to visit:
La Cantina Dal Abbazzia Rosazzo
info@liviofelluga.it