Family Winemakers is the voice for small production, family-owned wineries here in CA. Established in 1990 this organization advocates and lobbies for these small businesses. They have two tastings a year in Southern and Northern CA respectively, and I love to go and support this organization and it's wineries.

The annual Northern California tasting took place at Pier 27 on the picturesque San Francisco Bay. The site was spacious with excellent views from every direction. This is a prodigious tasting of over 100 wineries so I didn't get to sample every wine even though I was spitting. Fortunately they provide bread, cheese, charcuterie and chocolate to balance out your wine-tasting experience.

I visit my perennial favorites such as Navarro for Pinot Noir and Alsatian whites (the late harvest Gewurtzraminer was so pretty); Lagier Meredith for Syrah, Zin, Malbec and the obscure Mondeuse; Delectus for classic Bordeaux varieties from Napa. And of course the Cabs from Ladera and the Pinots from Sojourn. 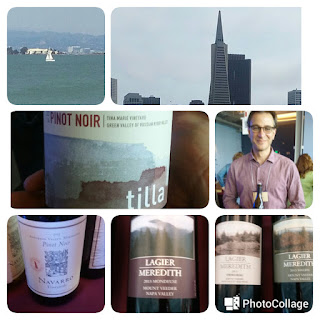 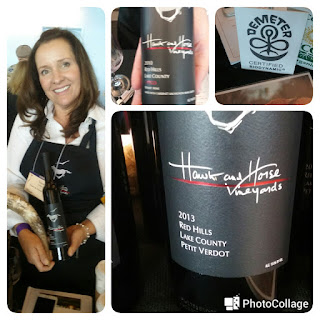 And then there are my new favorites: Thirty-Seven from Sonoma showing their crisp Albarino and a delicious red blend featuring Blaufrankisch, amongst their line-up of Chardonnay and Pinot Noirs. And then I found the soulful, balanced Pinot Noirs made by winemaker Atilla Telli under his label Tilla. He learned the trade from Scott Rich, owner and winemaker of Talisman Wine, one of my fave Pinot houses in Sonoma. He featured Pinots from the Tina Marie Vineyard in the Russian River Valley and the Spring Hill Vineyard of the Sonoma Coast. Atilla is a winemaker to watch.

And then there was Hawk and Horse Vineyards which were developed from a former horse-breeding ranch in the Red Hills of Lake County AVA. I was initially attracted to their bottling of 100% Petit Verdot but was really taken in by the Latigo which is winemaker Tracy Hawkins' award-winning Port style dessert wine made of Cabernet Sauvignon. Latigo is a wine made for chocolate and cigars and so tasty. Hawk and Horse is also one of the few wineries that is completely biodynamic, organic and even Demeter certified. They also raise Scottish Highland cattle on the property along with the eponymous Red-tail Hawks.

And then there was Bella Grace an Amador County winery which was the new darling of the 2016 Wine Bloggers Conference held in Lodi this August. They have a stellar line-up of whites including Vermentino, Roussane and Grenache Blanc. The reds included Zinfandels, Barbera and a GSM blend. These wines are worth the trip to the Sierra Foothills.

I love going to this event not only to taste wines but also to speak with people who are passionate about their wines and the crafting of them. Family Winemakers is a worthwhile tasting to explore the great variety of wines California has to offer by producers you might never find anywhere else. Thanks to Family Winemakers for this opportunity to taste at their event. --Xandria
Posted by Xandria