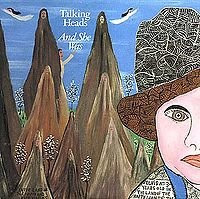 Thanks to Katie at Gonzogastronomy for another interesting Wine Blogging Wednesday. It has been a crazy, busy Spring leaving me with a ton of backlogged blogs to write up. However, this was a first in that all three BrixChicks managed to get together for this exercise. The instructions said to try whatever wine you had with a variety of different kinds of music. Between the three of us, we had a veritable smorgasbord of musical stylings on Xandria's MP3, Janesta's iPod and my trusty iPhone. We also had three samples we had been given from Icon Estates, Benson Marketing and Hahn respectively. Janesta ever the hostess with the mostess whipped up "leftovers". But we decided to start the exercise with just music and wine first. So we all first used our own device and randomly listened to something we knew we liked. In my case, the shuffle popped up a bouncy Talking Heads tune, " And she was" to go with the 2008 Drylands Sauvignon Blanc, Marlborough, New Zealand. I did the see, swirl, sniff taste without no soundtrack first. I observed a clear, pale straw color and aromas of young coconut, passionfruit and grapefruit with a slight edge of grassiness. It had a crisp bright taste with flavors of sugared grapefruit and a nice acidity. I squealed with delight when the iPhone shuffled its way into a song that went so well with the character of the wine---bouncy, bright, crisp and citrusy. I looked it up on Wikipedia and apparently "the song was written about a girl he [the songwriter] knew who used to take LSD in a field next to a Yoo-hoo beverage factory in Baltimore, Maryland. Okay so nothing to do with NZ sauvvy blanc, but as far as pairings went, it was nice. Snappy tune. Crisp wine. Good. What would happen when we switched devices and something unfamiliar came on? More later...

The second wine was 2007 Fortant Malbec, which unfortunately drew a selection as bitter as a Jacobean revenge drama. Amazing how people totally skirt the whole violence thing

when a country pop diva is wielding the baseball bat. That's right. Carrie

Underwood swinging out with "Before he cheats,". Having tried eight or nine Fortant wines and being consistently amazed by the freshness, fruit character and delightful construction, I really felt like the music influenced unduly the wine. The initial nose I got was slightly off yellow cake batter. I was afraid to try it. However, when I sipped, I got a slightly gamy, spicy wine. I find my response to Malbec in general kind of hit and miss, but I have loved the Fortant offerings so much, I had high 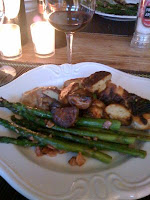 expectations for this. Weird. When we played pass the device, I drew the song "Dare" by the Gorillaz, with which I was unfamiliar, but as soon as the music changed, I kept finding more and more things to like in the wine. In the end, the nose opened up and provided more of a sour cherry muffin 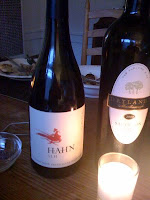 mix scent. And the perceived bitterness really was from the song! With the bouncier music, I got Mexican cinnamon stick in the mid palate which was nice. As well as more fruit flavors. I was skeptical that music would influence taste. SO fun to learn something new!
We closed the evening with an amazing bottle of 2007 Hahn SLH Pinot Noir and the delicious "leftovers". The mushrooms in the sauce brought out the forest floor character and also lots of spice and fruit. Who knows what was playing? Great wine. Yummy food. Good company.