Rave Wine and Food Pairing of the Month - Octopus and Vermentino! 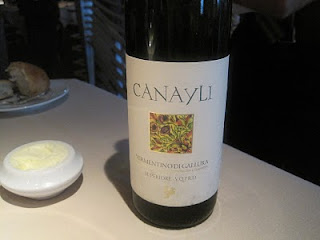 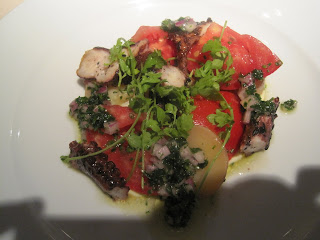 Who does not love a good deal especially in the world of fine dining?  The Brixchicks certainly do (especially when one of them is unemployed!)  So when BrixChick Liza found a $45 prix fixe menu featuring Sardinian cuisine at San Francisco's Jardiniere we jumped on it.  Three courses including wine for $45 on a Monday night at a well-known SF resto.  SCORE!
Being a lover of seafood there was one course that really stood out to me which was the Octopus Salad paired with a Vermentino from Sardinia.  Here are the details:
The Wine - 2008 Canayli Vermentino di  Gallura Superiore DOCG Sardinia
Vermentino is the most widely-grown white grape on the Italian island of Sardinia.  This wine is a medium straw color.  There are aromas of orange blossom, herbs, coconut and green pepper.  The thing about this dry white wine is that it is acidic yet it has a smooth texture on the palate.  It totally gratified my discerning palate that is not usually so gratified by dry white wines!
The Food - Salad of Octopus with potatoes, tomatoes, and herbs on a pool of aioli
If you have never eaten octopus because you are afraid it may be chewy and tough, perish the thought!  Octopus is tender and mild and delicious.  In this particular salad the glistening chunks of octopus swim in a pool of garlic aioli with acidic tomatoes and supple pieces of potatoes all sprinkled with oregano and thyme.
Together the wine and octopus become a symphony of smooth and acidic flavors complementing one another.  It was heavenly.
And yes, the rest of the prix fixe was fantastic which included roasted pork, pork belly terrine and fennel salad which was expertly paired with a Sicilian Nero D'Avola.  Dessert was Semolina Cake with bruleed figs accompanied by a Late harvest Moscato from Napa.  If you are are in search of a new yet inexpensive dining adventure on a Monday night go to www.jardiniere.com to make a reservation.
Posted by Unknown 5 comments:

Everything was just perfect...

Liza and I got a great introduction to the menu at Fleming's in Palo Alto, CA. If you think the food looks good, I wish you could have tasted it. Paired with a lovely Sanford Chardonnay and Frog's Leap Merlot, we had a memorable meal, courtesy of the great team at Fleming's. 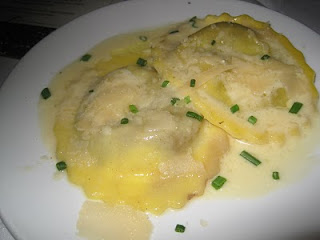 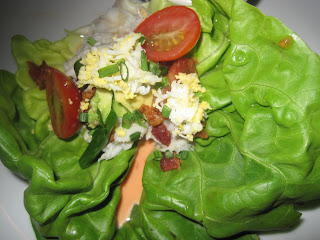 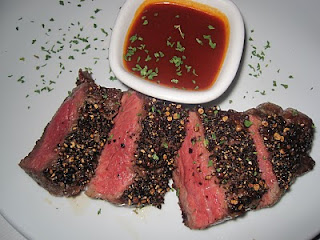 Prime New York Strip Steak with peppercorns and porcini dust - one of the best steak dishes I have had in Northern CA. 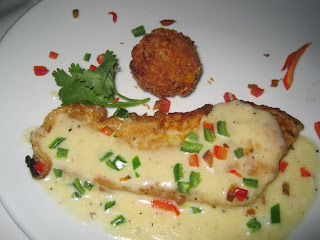 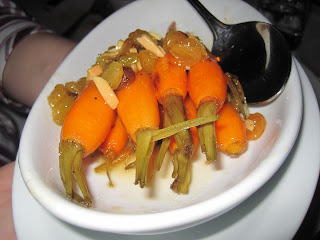 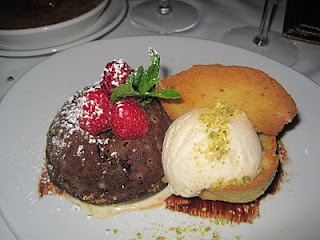 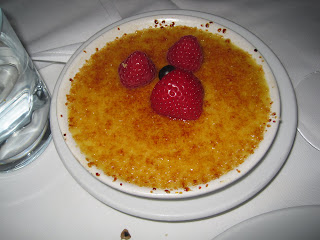 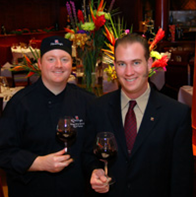 Executive Chef Chris Bennett at Fleming's Palo Alto and managing partner Wayne Hanseth are standing by, ready to make your next occaison special

While some of these seasonal offerings are gone, it's definitlely worth it to become a "friend of Flemings:
Sign up here:
To keep up with the new treats for "Friends of Flemings" every month.

They have state of the art video teleconferencing and BrixChick Liza has used them to bring several states together for fun and informative and super green (No air travel!) meetings.  Flemings works with you to provide the right time zone offerings from cocktails in Miami to steak and Artemis in Palo Alto for memorable meetings that are a breeze to plan! 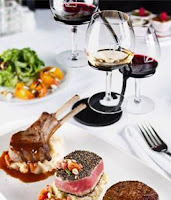 *The available vintage varies by location
Posted by Unknown 1 comment: 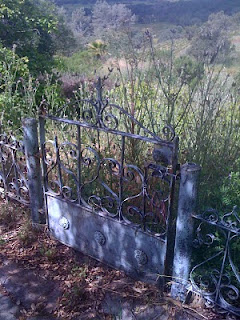 Winding my way from the flats of the East Bay all the way up to VinRoc Wine Caves location, elevation 1600 ft, I definitely felt outnumbered by wildlife. The springlike weather, in-progress main house and gorgeous, pastoral space made me expect Heathcliff rather than hosts Kiky Lee and Micheal Parmenter.  But once the rest of the group, Amy Cleary, Thea Dwelle and Marcy Gordon arrived and the tour began, it was the wine that took center stage.  We started with a lovely Enjoie Dry Rose ($14).   Made from a blend of grenache and barbera, it had a dark (for rose) watermelon color, interesting aromas (Marcy said "hint of portlike scent")  with a touch of coconut and cherries.  Bone dry, with complex flavors, the wine went well with turkey, salad and fruit.  And at 12.5% alcohol, a porch friendly sipper.  Next, we tried the Enjoie RTW ($40), a Bordeaux blend billed as the "little Brother" of the flagship VinRoc Cabernet.  A blend of mostly Merlot, purchased, and Cabernet Sauvignon grown on property, this "friends and family" wine, went down easily and left me eager to sample the flagship.  First, a tour of the caves and an introduction to the VinRoc philosophy.  Since all the fruit comes from the property and they have all the processing equipment right there too, they can completely control the process in an intriguing small batch production.  Michael "micro"manages the fruit, picking one ton at a time... cluster by cluster if needed... and processes the fruit in smaller bins, where they are seeded and stemmed right away.  The grapes are handled carefully, letting gravity crush them, and each bin is processed to allow VinRoc to blend the best batches together into the VinRoc.  We tried the '06 VinRoc Wine Caves Cabernet Sauvignon ($100).    And speaking of wildlife, this totally brought out the Wine Cougar in me.  The aromas were cedar, chocolate and black fruit.  Careful management of the fruit controls the extraction to produce complex aromas and flavors without overt fruitiness.  A lovely warm finish and I was hooked.  Yes, I agreed that it is young, but I found it completely drinkable now. Rowr! 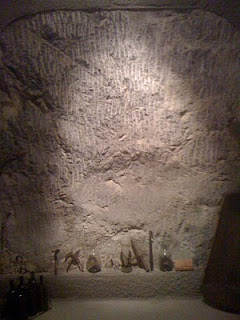 Vin Roc produces between 200-300 cases a year.  They are sold in several fine dining places in SF and LA including Michael Mina and Gary Danko.  Or you can order directly from the winery if you live in CA, AZ or NY.  But if you are visiting it is definitely worth a trip here to experience this unique part of Napa.    Email cheers@vinrocnapa.com for more info.  The VinRoc offerings flow from the landscape and  provide great expression of Atlas Peak as well as the unique perspective of the owners.
Posted by Unknown 1 comment:

Holy Labor Day, Batman! With all the craZiness lately it's been hard  to find time to raise a glass. but knowing Xandria and I, we manage. Tonight a cozy spot I need to be reminded of, Cesar's. Arguably the  East Bay's best Sangria and Happy Hour till 6:30. While I was  finishing up the day job, Xandria was snagging a table and ordering. And more importantly unlocking the sangria's secret: Moscato d'Asti
for florally effervescence, Ruby Port for a tasty kick. All this with a snappy balance of tart and sweet. Fast service that will cheerfully get you to your movie on time or let you linger. Try it  if you're around!
Cesar's
4039 Piedmont Avenue
Oakland
Posted by Unknown No comments: