Located in a charming, sunny walk up in San Francisco's historic North Beach District, the Cheese School sets out its mission as designing classes "to be fun, informative and most of all, delicious." Add wine into the mix, and you can see why I had been looking forward to this class ever since I first learned of it. Lynne Devereux did a great job of making sure the goals were met. I walked in to be greeted with both a flute of NV Grandin Brut, Loire Valley, and aromas of cheese. While waiting, I peeked into the classroom to find it elegantly set with the tempting plates of 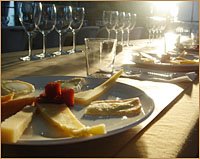 cheese samples and different little dishes and sides. I could hardly wait! The format of the class was to try each iteration of four wines and eight cheeses in a matrix of pairs. I love trying things in this style, because while you're sure to get a couple of clunkers, you are free to explore all the potential combinations to satisfy your own personal taste. Lynne was there to moderate and answer questions on all things cheese. Her deep knowledge of cheese making, affinage, and cheese in general made it very interesting. Our class was lively and I could tell everyone had very different preferences. In summary, I learned that the best wines to pair with cheese are those that have a crisp texture, fruit forward nature and gentle tannins. A cheese can complement or contrast with a wine's flavor profile and/or texture to make successful pairs. Also dessert wines tend to make easy matches because of their sweetness and silky texture. While I was completely mad for all the cheese I tried, I wasn't as happy with the wines that were selected. But it think the examples did help illustrate the principles Lynne was trying to demonstrate. Here's a list of the Cheeses with the suggested best pair:

Garroxta, pasteurized goat, Catalonia, Spain: Natural rind which is made in the traditional manner and thus rubbed with olive oil while it waits in caves in the Pyrenees. This is a sweet, firm, salty cheese with hint of goat. While I loved this cheese by itself, I felt the least objectionable pairing was the Cotes du Rhone red. Lynne mentioned it might be easier to pair with a more overtly fruit forward selection.


Fiore Sardo, raw sheep, Sardinia, Italy: Since the cheese was aged the proper amount, it is legal to be sold in the US though made with raw milk. Not being a fan of the gaminess of most sheep cheese, I was not looking forward to this. But, when I tried it, I was converted. It had a salty, nutty, floral quality I found went well with all the wines---except the dessert wine. My note on that was "Nasty". The best paring was the Cotes De Rhone. Cheese and wine created synergy where floral salty cheese, lifted the fruit in the wine.

Three Sisters, Serena, raw cow, Lindsay, CA, USA: This was a farmstead cheese meaning the cheese was made on the same farm where the cows were raised. This tasty artisan cheese needed a nice California fruit bomb. None of the pairings were successful. I was wishing for a flask of my single vineyard Ridge Dusi Ranch!

Comte, raw cow, Jura/Franche-Comte, France: Lynne showed us how she could tell the cheese had been made from summer milk by the golden color. This cheese had a pronounced odor so I approached it carefully, however the flavor was rich and buttery. The best pairing was the Sauvignon Blanc where the grassy notes of the acidic wine combined with the meadowy taste of the salty cheese. Also was nice with sparkler.

Redwood Hill, Gravenstein Gold, raw goat, Sebastopol, CA, USA: This was a stinky cheese. Given the reach and power of its aroma, I was not anxious to try this. Made in the style of Northern Alsatian cheese, Lynne told us it was the B. linens bacteria that made the strong smell. Washing the rind in apple cider created a lovely appley finish to it. Delicious! Go, Cowgirl Creamery! Best pair was the dessert wine.

Rogue River Blue, raw cow, Central Point, Oregon, USA: A medium texture medium veined blue cheese with a delightful nutty, berry, foresty taste. There were pieces of the leaves that the cheese are wrapped in while they are aged. Rogue Creamery soaks grape leaves in pear brandy and wraps the cheese in them before aging the wheels in caves. Delicious! Lynne mentioned the cheese wins many awards all over the world. I can see why. Best pairing, dessert wine.
Here is a list of the wines:
Grandin Brut, NV, Loire Valley, France: Nice almondy sparkler
'07 Isabel, Sauvignon Blanc, Marlborough, New Zealand: Lovely crisp wine with hints of coconut, savory fruit in nose and delicious limey citrus flavors
'06 Rasteau, Dame Victoria, Cotes du Rhone-Villages, Provence-Alpes-Cotes D'Azur, France: Red
'97 Domaine Fontanel, Rivesaltes Ambre, Languedoc-Roussillon, France: Lovely unctous dessert wine that introduced me to the clasic rancio nose. Made from 60 year old Grenache Blanc vines it was a joy to drink!
Posted by Unknown

I love Brillat-Savarin, have you tried it with a red Burgundy, pref.something older and savoury

THat was the only cheese I had had before hand. I love it. Only recently, an even creamier (if you can imagine) option came into my life: Delice de Bourgogne. Yum! I'll bet in the whole "goes with grows with theme", a savoury Burgundy would be just the pair!