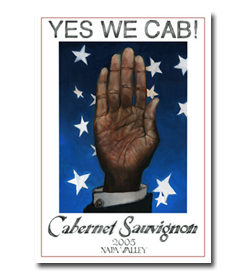 In honor of the dawning of a new era of American politics, we attended a fun little inauguration gala at Periscope Cellars in Emeryville, CA. which was also a release party for the Yes We Cab! Cabernet Sauvignon 2005 Napa Valley, Periscope's newest creation inspired by Barack Obama.

According to Brendan Eliason, owner and winemaker of Periscope, this special wine was created after he met Barack in 2007 who came to thank Brendan for his fundraising support. This wine was a truly collaborative effort by Obama supporters in the Oakland/Emeryville area and the label was designed by local artist J.B. Lowe.

But just how does this wine taste? Is it a special wine for this momentous occasion?

Brendan likes to say his wine is "Elegant and stately like Barack Obama himself."

Xandria likes to say this wine is a winner like Barack Obama. I give it 90 points! But you better move fast if you want some as only 58 cases were made at the decent price of only $18.00 per bottle.

We drank it as we watched the new President and First Lady dance to Beyonce's "At Last", and scarfed down the kick-ass tamales made by Tina's Tamales of Oakland. Yes, it was a great beginning for a new year filled with hopes for a better future.
Posted by Xandria