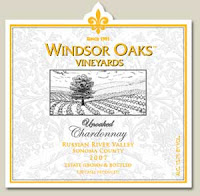 So, this past weekend, I spent barrel tasting in Sonoma, but Janesta and I made time to do our first ever All White Wine Blogging Wednesday and pitted the North represented by '07 Windsor Oaks Unoaked Chardonnay (which I purchased on site at Windsor Oaks) against the '07 West Cape Howe Unwooded Chardonnay . How did it go? Well, first, Janesta and I delighted in the easy open (screw top! whoo hoo!) of the Australian offering. First blood drawn goes easily to the Aussies. Once the tops were popped, we took a long look at color. Subjective. The Northern offering was a clear, bright citrine, while the South had a hint more butter in its straw yellow cast. Draw. Yellow is yellow after all and the fragrance in the air bespoke wine that needed drinking! Onto to Aromas. The West Cape Howe was decidedly fruity. We debated on the savoury tropical fruits that best matched the delicious perfumes we fully inhaled. The Russian River Valley was sort of slacking here. Old apples? Green apples? Cellar floor? Whatev. The lure of the Aussie perfume was hard to resist. See? Check. Sniff? Check. Sip? Ha! The good part! Swirling the offerings in the glasses, we thought this would be a slam dunk for the South. Beautiful aromas. Lovely color. What more could we ask for? Then the taste test: Russian River Valley In The House!!! Flavors of stone fruit and apples and a delightful acidity I knew would excel at the "Pairing with Food" test yet to come. While the Australian offering had lovely fragrance and was a fine sipping wine, the Windsor Oaks flipped the afterburner switch with its food friendly flavors. With salad of romaine lettuce, sugar plum tomatoes, and Maytag Blue cheese dressed with grapeseed-fig balsamic mix, RRV took the prize. With Brussels Sprouts cooked in lardons, both wines did well, but RRV, again, had the needed acidic backbone to pair well. Even the easy-to -pair Polenta-and-parmeggiano went much better with the cooler climate Unoaked Chardo. Don't get us wrong. The West Cape Howe had strong QPR coming in at $17.99 compared to the delicious Windsor Oaks at $29 winery direct. However in the ultimate test, which bottle was emptied first, the Windsor Oaks handily won. We were wringing out the bottle of the Windsor Oaks with two glasses to go on the West Cape Howe. Still, we ended the evening with two empty bottles and a better appreciation for Aussie Chardonnay, our tummies packed with the delicious Russian River Valley Unoaked Chardonnay from Windsor Oaks. North prevails!

In summary, the '07 West Cape Howe had nice fragrance of fruit. The flavors were like dried papayas without the sweetness. Very dry, it had a round, rich mouthfeel and fruity nose. It also had low acidity , which contributed to its being a better sipping wine on its own rather than a food pairing wine. The '07 Windsor Oaks had less overt fruit and better acidic structure which let it make magic with the food pairing. In short, just what you might expect pairing hot climate Australian where blasting heat gave us languid deliciousness and the Northern climes of Sonoma gave us a bright focused wine with pleasant acidity.

WINNER: North!
However we felt like we were all winners for getting to try such great offerings. More about the Windsor Oaks here: 2007 Unoaked Chardonnay... You will be hard pressed to find as lovely a spot. And the West Cape Howe here Unwooded Chardonnay. An easy drinking delight.
Janesta and I had a great time comparing these two wines against each other. Thanks for another fun Wine Blogging Wednesday!
Nick Stacy, the representative for West Cape Howe will be at the Jug Shop pouring on 3/21 and Janesta and I plan to be there! See you there! Click here for more details
Posted by Unknown

Awesome - I got Liza to taste white wine for an entire evening. She rocks!