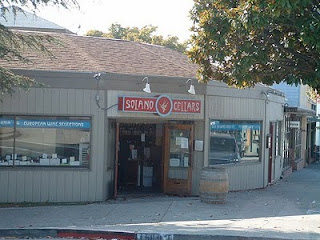 If you ever get a chance to visit, or better yet take one of the classes at Solano Cellars, do it!  They have a lot of great selections of Old World Delights and also present an interesting take on off beat items.  Take Orange Wine.  No, neither wine made from oranges (ick!) or the reason the Oompah Loompas were so unsmiley (hungover!), but rather an expression of white wine grapes processed with skin contact that end up in hues from golden to downright Orange Crush-like, with the most interesting flavors and heft.  Presented with the help of distributor Domaine Select, who focus on these types of wines, Solano Cellars brought out seven interesting tastes along with delicious cheese.  Some of the wines were made in usual ways, just with additional skin contact.  Others were made using an ancient technique where giant pottery casks or amphorae are buried.  These are shaped like giant (3000 liter)  jugs where the neck narrows, so the bulk of the container is in the ground, shaded under a roof or sideless shed.   In the production of the Lunar, barriques are buriied in the earth and nature takes its course.  Eventually, the wine is bottled on its lees (the expired yeast, etc.) so the end of the bottle contains sediments.  I found all the selections compelling:
'06 Castello di Rubbia, "Leonard", Malvasia Carso, Friuli, Italy ($51)
This wine is a clear golden hued orange.  Its aromas were fresh and minerally along with hints of dried pineapple.  The mouthfeel was rich and almost silky.  With flavors of dried pears and a long minerally finish.  It ended up being my overall favorite of the evening.
'99 Edoardo Valentini Trebbiano d'Abruzzo, Italy ($100)
Cloudy yellow color.  Nose was interesting with hints of funk and fuel, cat piss, tobacco and Asian Citrus.  I got definite scent of loquats.  The wine had a lovely silky texture.  Nutty, citrusy flavors that went well with the cheese.  Yum!
'00 La Castellada Bianco, Ribolla/Pinot Grigio/Tocai/Sauvignon Blanc, Friuli, Italy
Aromas and flavors of GrapeNuts and spice.  Yummy aromatics.  Nutty taste with malty hints and Lemon Tootsie Pop.
'06 Movia Ribolla "Lunar" Brda/Collio, Dobrovo, Slovenia ($45)
Color of cloudy Orange Crush.  Initial aromas of white peaches, golden raisins and honey.  Later more spice and hints of nettles.  Later, floral, rosy aromas came out.  Flavors were subtle and changed in the glass.  It was delicious with the cheese. this wine is made in an ancient manner where it is not touched at all except when being picked or after 7 months when whatever is pourable is bottled.  It is even stirred only by rhythm of the moon, thun the moniker "Lunar"
'03 Gravner Breg Friuli, Italy ($115)
Made first in amphora, then aged in oak.  A blend of Chardonnay, Riesling Italia and Sauvignon Blanc.  The color was the clear and orangey, like bottled ice tea.  The aroams were ripe with honey, dried figs, spice and honeydew melon.  It had intriguing flavors, were woodsy with hints of sandalwood.  And a sharp finish.  And was definitely food slutty as the cheese combined with it to make it far yummier with food than without.
'05 Vodopivec Vitovska Classica, Carso Friuli,  Italy ($83)
This color was clear and orange.  Aromas of bananas foster with carmelized fruit, cinnamon stick.  Flavors included baking spice and crepes suzette.  Thinner mouthfeel than many of the others. Slightly grippy with an initially sour finish that smoothed over time to platano maduro.
'03 La Castellada Ribolla, Oslavia Collio Friuli Italy  ($80)
Color of honey.  Aromas of apricot with a touch of herb and slight hint of gasoline.  Prominent acidity.  Sour flavor with apple brandy notes.  It seemed really food freindly and made me want to pair with pork in a cream based appley sauce.  Interesting notes of orange peel on the finish.
All in all a delightful introduction to the world of Orange wine that only made me want to find out more.  Many thanks to Jason and Kirsten at Solano Cellars for always mixing it up! and bonus point for Brendan from Periscope Cellars who busted out some Cali examples of skin contacted whites that delighted us even further.

A great overview and I may just have to nick some of your evocative tasting notes for our writeup! (I will give credit, of course.) We do indeed love off-beat wines and appreciate the kind words. As always, great writing and we'll see you soon!