An Oddyssey of Greek Wines - Part I

"Mezes" is a Greek restaurant in San Francisco owned by Nikos Maheves a CIA- certified Sommelier from Greece. Who better to take us on the journey of learning about Greek wines and food? I recently attended a fun get-together at the restaurant for a food and wine pairing session.

Here is a short primer on Greek wines:
*There are reportedly 300 varietals indigenous to Greece. The main growing regions are shown on the map above.
*Greece is known mainly for their white wines
*With some exceptions Greek wines are not made to age. According to Nikos,very few reds are aged for more than 8 months in French oak. The wines are meant to be drunk sooner rather than later and they are defintely made for food.

Here are four of the most common varietals that you will find at a Greek restaurant:

The first wine for the evening was the 2007 Petra Rodytis by Kir Yiannis. Rodytis (ro-DEE-tees) is a white varietal and this one was from Naoussa in Thessalia which is a province in Northern Greece. Petra is the word for "rock" and indeed there is a strong mineral quality on the nose and palate. There are also grassy and citrus notes. It is light gold and highly acidic, dry, light-bodied and slightly tannic. In other words "food-slutty.) Perfect match with seafood and this was served with lightly-fried calamari with garlic aioli. 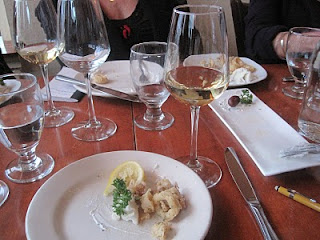 The second white of the evening is the 2008 Mantinia Moschofilero from Tselepos which is on the island of Peleponesse. Moschofilero (mo-sko-FEE-lay-ro) literally means "scent of flowers" and the nose is very floral with notes of rose, honeysuckle and honey. the mouthfeel was silky with light acidity and light tannins. We drank this with zucchini cakes but it goes equally well with seafood. 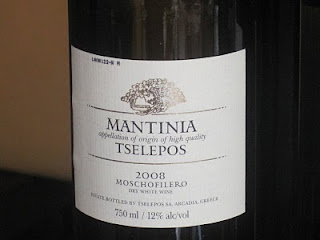 Our first red of the evening was the 2008 Notios Peleponnisis Dry Red Wine. It is made with a common varietal called Agiorgitiko (Ah-George-GEE-tee-ko) which means "St. George." This is a medium ruby-colored wine. The nose is filled with red plum, cherry, blackberry and cinnamon. The mouthfeel is like velvet and there is a lovely olive note on the mid-palate. This was served with grilled sausage and beans in tomato sauce. I also like this one with dolmas and spanakopita. 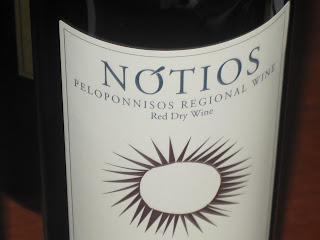 The last wine of the evening is known as the "treasure" of Northern Greece, Macedonia to be precise, and it is called Xinomavro (Ksee-NO-mah-vro.) Easier to drink than to say! Xino means "sour" and mavro means "black." We had the 2008 Paranga Dry Red Wine by Kir Yianni. The nose is redolent of roasted tomato, red cherry, and black olive. Xinomavro is usually aged in oak for around 8 months so there are some tannins on the mouth feel. It is medium-bodied, nicely acidic. And no, it does not really taste sour! It is the match for highly-spiced meats like lamb, beef and pork. 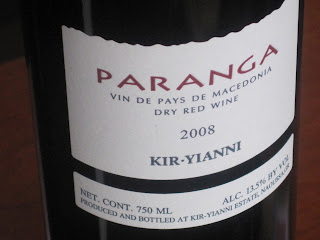 I will soon be attending a seminar on Greek wines put on by "All About Greek Wine" where I hope to learn more about the Greek wine industry, many of the wineries, and the different varietals. Until then, enjoy and visit Mezes at 2373 Chestnut St., in San Francisco, where they do have a large list of Greek wines.
Posted by Xandria

Interesting notes on Greek wines. I have a Greek friend in Sacramento who makes his own wine. He also says that it is meant to be drunk NOW! Cheers!

Interesting to see Greek wines in your part of the world. I went to a Greek food and wine matching not long ago and was pleasantly surprised, even tried the Notios, which I'm sad to say was not one of my favourites but to each his own!

Very nice, brief introduction to Greek wines. Allow me one, minor, geographic correction concerning Naoussa. It is not located in Thessalia but further north, in the region of Western Macedonia.