Bodegas Estefania: The Land or #olewinos Visit The Bierzo DO 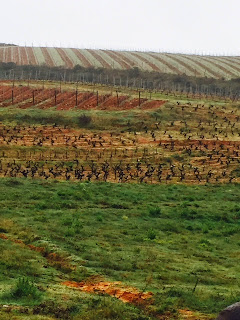 Pliny the Elder mentioned Bierzo in his writing.  Notable then, it's still in business today in the Castile-Leon region of Northwest Spain. Bierzo, a Spanish Denominacion de origen (DO),  has natural beauty, history and delicious wine. Ancient influences are still visible via the Celtic fortresses, in Spanish, castros, that sit below the skyline above wise old vines.

Expect to find many wonderful features of architecture and art from the Romans, the Celts and the Moors.

We stayed in Ponferrada.  A lovely city where residents live their lives in the shadows of old castles, stone walls and the lovely mountains that capture the lavender twilight and bewitch you.

Ponferrada is along the route of the Pilgrimage of Santiago, so you will see people on foot or bicycle making their peregrinations along the steep twisty roads that connect the areas.  You wonder as you see them what favor they need or what absolution they require that drives them to traverse, carless, this rugged terrain.

Bierzo has one flat plain and the rest, is composed of mountains and small valleys.  There are many ways to go from Point A to Point B.  The prettiest way is not always the fastest as we found out when our journey to lunch felt like a peregrination.  After a 45 minute ascent we later found out there is another route that is a quick 15 minute zip zip zoom on the freeway.  No matter.  #OleWinos have plenty to expiate.

The vineyard holdings of Bodegas Estafania were great examples of the small valleys ringed by mountains that are characteristic of the DO.

We looked up to the Celtic fortress in one direction, and up to the Pieros parcel of the La Florida vineyard in another.

In addition to Bodegas Estefania's  estate holdings, they source fruit from growers.  Bierzo is like Burgundy where great fruit can come from from traditional Vigernons.  Northern Spain had Napoleonic inhertitance laws called mini fundio where ever smaller parcels become the result of property passing from parents to children.  At the beginning there were three very large cooperatives.  Their role was integral to maintaining old vines. But their role was also as viticulturists first, which has such different goals from that of creating lovely estate wines of quality.  MGW Group is helping by driving acquisition activity when vignerons want to sell.. The region is growing with 72 wineries today.  There were less than twenty in 1999 when this winery started. 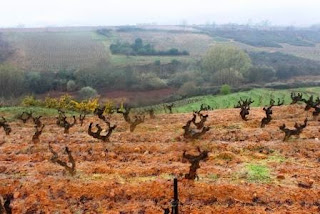 Bodegas Estfania was founded 15 yrs ago in 1999.  From an old dairy, the Frias family  built up the winery production facility.  They worked with Raul Perez, whose dedication to Mencia helped guide the winery's direction.  In 2014 they teamed up with the MGW Group.  At 250k bottle production it is comfortably midsized.

The Bodega Estefania team looked for a good winemaker.  They were told told Mencia was not suitable for aging.  Winemaker Carlos Garcia and General Manager Pablo Frias are proving everyone wrong with wonderful Mencia vinified with a French oak protocol that gets better and better with age.  They invest in true Pagos, which are special single vineyard estate holdings.  Their Pagos de Posada bottling under the Tilenus brand is a wine that leaves you wanting more of this unique and special expression of place.  More later on the wines themselves.

Bierzo's production is  dependent on weather as to  how much quality yield they can get.  The space is limited by the mountains.  The Bodegas Estefania team is said to be :
"In love with vines because when  you work with 80 yo vines, it can only be done with love" 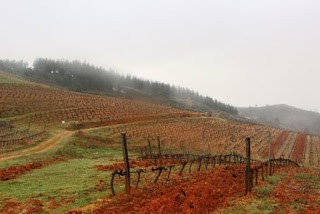 The soil types of the holdings are sandy clay or slatey clay. Prehistoric Bierzo was full of water so they often find marine fossils in this glacial zone. La Florida vineyard is in the elevated land with slate in the soil and old vines.  Pieros is a parcel with the oldest vines at some  80+ years 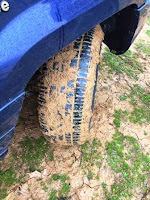 Vines were planted when horses were the newest technology "machines" so harvest must be accomplished with SUVs and trailers.  Lots of sweat equity goes into each harvest.  When clay is solid and dry, it's  hard for vines to get water, so they break up the soils manually. The newer plantings are spaced wider. Wide swaths of grass reduce erosion.  Vineyard workers re compost all the cuttings, though the process takes three years to produce usable nutrients.

Mencia is a tenacious grape.  Its taproots can go down for meters, while its regular  roots only go down 3-4 cm.  The old vines can produce as little as one kilo per vine.  In addition to the space constraints, harvesting also adds to the cost as the berry selection process must be done carefully and by hand.  Mencia, while delicious,  can  be a fractious variety with expert care needed to balance acids, tannins and create harmonious balanced wines.
Luckily for us, through the teamwork of the Frias family and the MGW Group, delicious ageable wine is being produced from this interesting and lovely DO.

Many thanks to the MGW group for hosting us at this wonderful region where the land supports this unique grape variety.  Bodegas Estefania is making great things happen and I appreciated the opportunity to learn and try in situ something so special

Also to Kraynick and Assoc for organizing it all,  and making it fun!