The Ancient Wines of Campania from Fattoria Alois

I recently attended an Italian wine-tasting and had the pleasure of meeting Massimo Alois, winemaker and marketing/pr manager of Fattoria Alois in the Italian region of Campania. He is the son of Michele Alois and their winery, Fattoria Alois, is located in the Caitini mountains in the province of Caserta. Before they became winemakers the Alois family was known for their successful textile business. Massimo’s English is excellent so that evening I learned a lot about the regional wines of Campania and about the "ancient" varietals recently discovered in Campania. Andiamo! 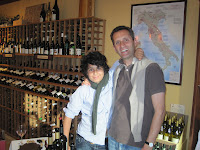 Massimo with his nephew, the next generation of Alois winemakers.

A very short oeno-history of Campania
Campania is a region in southwestern Italy, and the major city is Napoli (Naples). As you can see from the maps below there are many wine-producing areas in Campania but I am focusing on Caserta which is where Alois is located in the Caitini Mountains. This is volcano country and this winery is approximately midway between the active Mt. Vesuvius and the inactive Monte Nuovo. As for wine, the major red varietal is Aglianico, and the major whites are Greco di Tufo, Fiano Avellino and Falanghina. 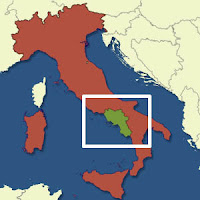 The Land of Wine
Campania has a history of being conquered by neighboring foreigners, starting with the ancient Greeks who were overwhelmed by the variety of grapes causing them to call Southern Italy “Oenetria” or land of wine. However, the Greeks brought their own vine cuttings with them and indeed, the Aglianico varietal is thought to have originated from a Greek grape and the Greek word for "Greek" is “hellenico.” On a more recent note the Bourbon Kings of France “situated” themselves in the region in the 1800s. The favored wine was white wine made of the Pallagrello Bianco varietal which was totally wiped in the phylloxera plague of the late 1800's.


The "Pre-phylloxera" varietals of Campania
Twenty years ago there was a government project devoted to finding ancient varietals that survived phylloxera attacks but that were no longer being cultivated. Well, the findings resulted in many re-discoveries and Alois is bringing these varietals back to life. These “rediscovered” varietals include Pallagrello Bianco, Pallagrello Nero and Casavecchia. The origins are believed to be from ancient Greece. More on these in my tasting notes below.

Tasting Notes and More
That evening we tasted two whites and four reds. Before I give my tasting notes here is some general info about the wines: 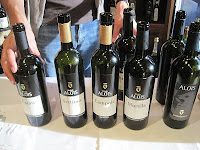 -These wines have all earned “IGT” status which in the Italian "wine laws" stands for “Indicazione Geografica Tipico”. This basically means that the wine comes from a specified geographical location but that grape varietals from other locations may be used.

-Very few of their wines are fermented or aged in oak.

-As I mentioned before, the winery is situated between two volcanoes, one of which is still active. Yes, this means the grapes grow in volcanic soils and there are traces (sometimes strong) of ashy minerality in the nose and palate of these wines.


I Vini
2009 Michele Alois “Caulino” – Made of Falanghina – light gold in the glass, light mineral notes and light citrus notes on the nose, this is a dry, acidic white wine that has a silky mouthfeel, savory notes and a long linger. This white is fermented in stainless steel and no oak is used for fermentation or ageing.

2009 Michele Alois “Caiati” – 100% Pallagrello Bianco one of the “pre-phylloxera” varietals. Less mineral more fruit, medium gold with peach and green apple notes on the nose. This varietal was the favored wine of the Bourbons and I swear it reminded me of a light and pure Chardonnay.

2007 Michele Alois “Campole” blend of Aglianico and and a bit of Pallagrello Nero – nose of cherry liquer and berry cobbler. Palate is very minerally. A bitter edge that smooths out on the back of my palate. The more I drink the more I want…complex and balanced. (my favorite) This wine is screaming for "Cioccolata!"

2008 Michele Alois “Murella” 100% Pallagrello Nero – this actually has some aging in French oak barrels lending oak and spice notes on the nose and palate. Blackberry cobbler on the nose with a dry, mineral finish.

2007 Michele Alois “Trebulanum” – 100% Casavecchia – This is the bold big boy of the bunch. Opaque ruby, with brambly red fruit notes on nose and palate, the Casavecchia or Old House” takes its name from the place that it was discovered which was next to an “old house” on the vineyard property. Dry, oaky with a smooth yet brambly finish that lingers on the palate…

ON the Lookout for Alois
These are wines to look for, especially if you are a lover of Italian varietals like I am. The QPR is excellent as most of these wines retailed for around $19.99. Campania may not (yet) be one of the famous wine-making regions of Italy but Alois is getting international recognition and their 2005 Trebulanum received high marks from wine critic Robert Parker, Jr. I may not be a” Parkerite” but his high scores do earn wineries recognition and I believe that Alois deserves the recognition.

Molto Grazie to Prima Ristorante and Wine Shop in Walnut Creek for having the tasting and for providing the appetizers!
Posted by Xandria

I love those more obscure Italian varietals and aglianico is one of my faves, even if I sill don't know how to pronounce it correctly. Glad to see those wines getting some recognition on your side of the States.

Pretty good post. I just stumbled upon your blog and wanted to say that I have really enjoyed reading your blog posts. Any way I’ll be subscribing to your feed and I hope you post again soon. https://wevino.store/