Bodegas Lavia Winery - The magic of Monastrell blended with Syrah, Bullas DO, Spain

The next stop for the #OleWinos was the Lavia Winery in the Bullas, DO.  Here, Monastrell is vinified with Syrah to make a sheer wine with flavor impact.  First a little about Bullas.  Located between the town of Murcia and the border with Andalusia, it is an area of very little rainfall and extremes in temperature.  The winds that blow in with rainstorms are so strong they splash windows with raindrops as well as a fine layer of silt from the neighboring North Africa's dust.  On the road to the winery, I experienced a total "I'm not in Kansas, anymore" moment when a road sign in Arabic flashed by.  The region has a colorful backstory. 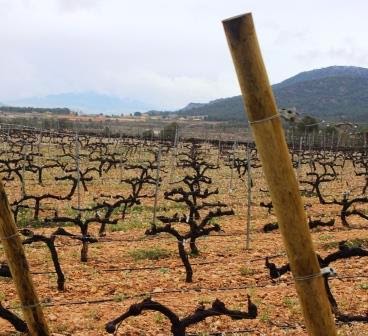 Wine making goes back 2500 years to Roman times, but Bullas was not established as a DO until 1988.   Between that wide gap, the region contended with Spain's shifts in history.  Finally, in the 1980's wine making became privatized again and people began to invest in making wines of quality. The main grape variety grown is Monastrell and dominates the plantings.  However Tempranillo, Garnacha, Merlot, Cabernet Sauvignon and Syrah are also allowed.  Bodegas Lavia has delectable Syrah that it blends


Of Bodegas Lavia's twelve hectares, two are planted with Syrah, and the other ten, Monastrell.  Syrah is 16 year old vines  on trestles The rest are Monastrell vines about 35 years old and planted about 750 m higher than Bodegas Sierras Salinas. The climate is different because of the mountain range.  Here in Bullas, pine trees hold humidity.  The vineyards in the Alicante DO saw about 55 hL of rain.  The Lavia vineyards got only 35 hL.  Luckily the humidity in Bullas is higher so holds moisture better.   They have two brooks within 100m, which even during the drought continue to run.  This confirms water tables are high still.  In the four days before (and during) our visit, more rain fell than all last year.  Timing is perfect because flowering is imminent and the vines will need the water.  Since 2009,  all the vineyards are certified organic (leaf).  Healthy organic practices allow the vines to go deeper.  No residue  allows the wine to be more expressive. vineyards are harvested by hand. 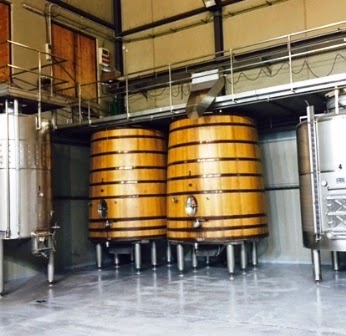 Similar to Bodegas Sierra Salinas, very gentle treatment of the hard won fruit is employed to make the wine.   Monastrell from Bodegas Lavia is unique.  The land here produces a grape that lends itself more toward a Burgundian style of vinification.  The goal is a fresh and elegant wine that speaks of its own place. The production facility is set up to use gravity to gently move the juice.  The production is small allowing them to use manual pigeage. With all that hand (and foot) work, the Bodegas Lavia people from all departments form a close knit team, where everyone pitches in to do what is needed, whether that is marketing, stomping or swabbing.

Native yeast start the fermentation.  Cold fermentation is done at 8 celcius to preserve color and aroma, and also to minimize the extraction of tannins.  Balancing all these is important to all wines, but especially to this interesting blend of Monastrell and Syrah.  Some of the high end wines are fermented in big wooden  foudres or tuns.

Sebastien carefully monitors the oak treatment so it doesn't overpower the wine. Among the techniques he uses are older barrels with light toast,  20% barrel turnover and bigger (500L) barrels.  Barrel protocol is important because alcoholic fermentation is done in barrel.  Some of the higher end wines see 20-22 months in barrel, while others are out in 12-14 months.  Current production is about 50,000 bottles.  The winery has more capacity, but they are building slowly to maintain quality and will not go over 100k

Bodegas Lavia is a relatively recent purchase for the MGW Group.  While we wait for Sebastien Bouton's wines to be released, we were treated to the current selections and well as a preview of upcoming wines in the barrel room.

Built in 2003, Bodegas Lavia is named for the nearby mountain. Lavia started as a passion project meant to produce very small lots of very  high quality wines as a hobby.  This laser focus on quality was perfect for MGW Group's goals and so they acquired it. The property is lovely and modern and one of the best appointed tasting rooms I have ever seen.  With a view of the grapes from all the windows and personal sinks for all, there is no need for a spit cup, though the wine is so delicious only the desire to retain my faculties to better appreciate the wine made me spit. Although for full disclosure, I wasn't that successful.Does it taste good though?  Answer is most definitely yes! 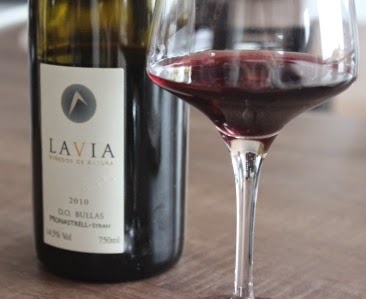 Lavia 2010
80% Monastrell and 20% Syrah.  The fruit for this wine comes from deep soil with rocks and stones. This produces fruit with thinner skins, less color and tannin, and more aromatic notes of black cherry and raspberry.  It has a lovely perfumey nose balanced with with more vinous elements.  Complex flavors that confirm the nose.  Tasty.

Lavia +,  2006 ,
Plus is 100% monastrell.  More brick in color and aromas of red fruit along with  tomato confit and an interesting element of postage stamp.  Sprightly acidity, which  is an important part of aging.  Flavors led by vinous elements. Mouth feel had texture of rustic linen to its tannins.  The briary finish had a sprinkle of cinnamon.

Lavia + Finca Paso Malo. 2012
Only made in good years, this luxury wine ($50-60) showed gorgeous bright garnet color, delicious blackberry flavors and had a  pleasant grip to its tannins.  The lovely finish has touch of smoke. The Finca Paso Malo is a single vineyard named for a dry creek bed with old rep for flash flood danger. This vineyard is 50 years old with sturdy clay soils that can hold up even a blogger who's been wine-and-snacking-24x7 for several days weeks ever
You can see the magic of Bodegas Lavia's team in the difference between their viticulture practices and their neighbors.  The Bodegas Lavia vines are planted in a marco real 2.5 x 2.5 square configuration.  This uses soil better so every vine has enough space for its roots.  You can also see their attention to detail in the difference between their cover crops and the bare landscape of the adjacent vineyards.  These first flowers after a hard winter are intentionally lush so as to call the bees to their first meal. This vegetation is  also good for the other fauna that eat bad bugs.

Bodegas Lavia has a unique and delicious expression of the land and of the Monastrell variety.  Blending with Syrah created a wine that was at once complex and ethereal.  It was wonderful to get a chance to try both the current releases as well as get a preview of the upcoming wines from the barrel samples.  I have to say, I have never tried barrel samples that were so ready.  I only wish I had a Star Trek transporter and a growler so I could import some magic to California.  You can tell we had an enormously enjoyable day with Sebastien, who we deputized as an honorary #OleWino.  We also met so many wonderful team members who together make the magic happen at this wonderful place.  Many thanks to our hosts,  Kraynick and Assoc represented by photog Mike Matilla and the amazing team at MGW Group who made our visit possible