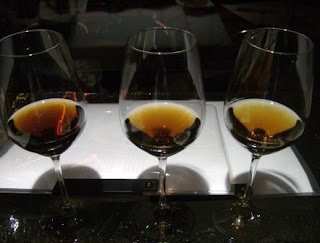 Let's get baked. Interesting challenge. Not being a girl who seeks out the port or madeiras, I was thrilled when Xandria found the perfect place to sample by the glass, Tha Alameda WIne Company in nearby Alameda, CA. I think of madeira as being old school and not necessarily in a good way. However the folks at the Alameda Wine Company have a great selection. Karen steered us toward the Rare Wine Company's Historic Series Madeiras flight. Partnering with R.D.V. Freitas, who owns Vinhos Barbeitos, they highlighted the connection between timeless US cities known for lapping up the Madeira throughout the 1700's and 1800's and the varietal they would love. Of the five possible varietals; Sercial, Verdelho, Bual, Malvasia and the elusive Terrantez, we were able to try three.
Charleston Special Reserve Sercial: The lightest in color and the driest of the three, this wine smelled exotic, like apple scented tobacco, rum raisin and something not quite vanilla. It was not sweet at all and had a sharp alcohol fueled kick. We had been given walnuts which rounded out the flavors and made a pleasing combination. By itself, well let's just say we made no plans to invite it to the St. Cecelia's Ball.
Boston Bual Special Reserve: Baked beans? Ha! Baked Bual! The Boston was much smoother and compared to my expections, had a restrained sweetness. It reminded me of a concotion I make by long term soaking of figs and vanilla beans in vodka. This wine showed excellent balance and a chocolatey finish.
New York Malmsy: I heart New York Malmsy! This had much more fruit in the nose and a choco-caramel aroma that was delightful. Sweetest and most viscous of the bunch, the Malmsy looked like Coca-Cola, but tasted complex and delicious. I could tell it wanted creme brulee!

We also ordered a Blandys Malmsy for comparison. It was simple and pretty and I think had I tried it alone, I would have liked it, but compared to the dazzle of the others, it ended up feeling more ordinary. 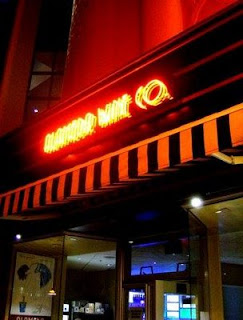 Completely not ordinary were the cheeses we ordered. Truffle Tremor made me shudder with delight! I selected a French triple creem cow's milk based Pierre Robert. Voluptously creamy with the butteriness of venial sin, this might get addictive. The chacuterie was tasty too and the portions stunned me as QPR off the chart! All in all a fun evening trying new things and finding a great new place! The Alameda Wine Bar offered a great experience combining easy parking, tasty snacks, great wine and expert guidance, I know I will be back and hope to see you there! http://www.alamedawineco.com/
Posted by Unknown

I heart "figs and vanilla beans in vodka"! And I heart this post!

To Joe Roberts, CSW: You heart me! You really, really heart me! THanks for reading and most of all thanks for commenting! It takes a while to make the Fig-vanilla-vodka infusion but it's totally worth it! Even better, but slightly deadly and best given to those friends you KNOW can hold their liquour, is floating the FVV infusion over champagne! Decadent!

Since BrixChicks are hip, they might want to be drinking organic wines, and there are plent to chose from. http://www.newrinkles.com/index.php/archive/organic-vines-create-better-wines/

Geri--Thanks for reading! I loved the list of wines to try with a new spin and will definitely seek some of those out!